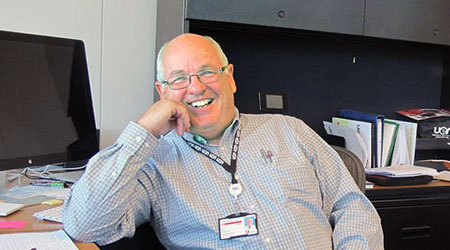 (Salt Lake City) - Dr. Ray Timothy, the longtime CEO and Executive Director of the Utah Education and Telehealth Network, has announced his retirement effective July 1, 2022. Timothy, 68, guided the network through a decade of expansion while facing formidable challenges including the COVID-19 pandemic and merging of the Utah Education Network and the Utah Telehealth Network. Through it all he maintained his signature smile as a compassionate leader unafraid to embrace technology and innovation.

“I’ve spent 45 years as an educator in Utah”, stated Timothy, “starting as a fifth grade teacher and then serving as a principal and superintendent in rural and urban districts. Now, after a decade at UETN, it’s time to focus on grandchildren, volunteer service, and travel”. Timothy, who grew up in the Box Elder County towns of Tremonton and Garland, earned a bachelor’s degree from The University of Utah, a master’s degree from Brigham Young University and a Ph.D. from Utah State University. His Ph.D. research focused on Curriculum and Instructional Supervision.

“Dr. Timothy has dedicated his professional life to serving Utah students, educators and communities. I wish he would agree to lead UETN for another ten years, but we regretfully accept his plan to retire,” said Dr. Robert Wagner, UETN Board Chair and Academic and Instructional Services Vice President at Utah State University. The UETN board plans a nationwide search for Timothy’s successor.

With Timothy’s vision, leadership and work ethic, UETN has become one of the nation’s premier broadband networks for education and telehealth. He is recognized as an innovator by other state and national executives who often ask him how they can replicate Utah’s robust infrastructure.

“UETN’s success is based on the unique diversity of our collaborative partners. They include leaders in public and higher education, administrators in healthcare, state and federal lawmakers, Utah’s recent governors going back to Governor Leavitt, and more than 20 telecommunication providers in every location of the state,” said Timothy.

With the support of the Utah State Legislature, Timothy expanded the network’s scope from education to include telehealth. As a result, UETN was well provisioned two years ago when the COVID-19 pandemic forced educators to teach online, students to learn from home and healthcare providers to offer virtual appointments. During his tenure, UETN also became headquarters of the Northwest Regional Telehealth Resource Center (NRTRC).

Timothy has encouraged his staff to take advantage of professional development and leadership opportunities. More than a few have earned graduate degrees and industry certifications thanks to his mentoring and example. He has also encouraged participation and sharing of expertise at multiple national and international conferences. Timothy himself served on the Schools, Health, Libraries, and Broadband Coalition (SHLB) Board.

“I think the key to success is to surround yourself with good, well qualified people and to allow them to contribute and to flourish as they utilize their talents and skills,” stated Timothy. “Throughout my career I have been fortunate to be surrounded by the best.”

About UETN. The Utah Education and Telehealth Network is Utah’s broadband provider for education and telehealth. UETN supports equity, reduces barriers and provides high capacity circuits to schools, colleges, universities and libraries, plus hospitals, clinics and rural health departments. UETN serves more than 675,000 public school students, more than 202,000 college students and more than 78,000 faculty and staff in public and higher education. It also connects more than 70 hospitals, clinics and health departments. In addition, it operates public television station KUEN, also known as UEN-TV, on behalf of the Utah System of Higher Education. UETN is funded by state, federal and private grants and is based at the Eccles Broadcast Center on the University of Utah campus in Salt Lake City.